Warning: The following work contains descriptive material and scenes of explicit sexual encounters between male and female adults. While not erotica per se, it is intended for adult readers only.
The Princess of the Wild | Excerpt 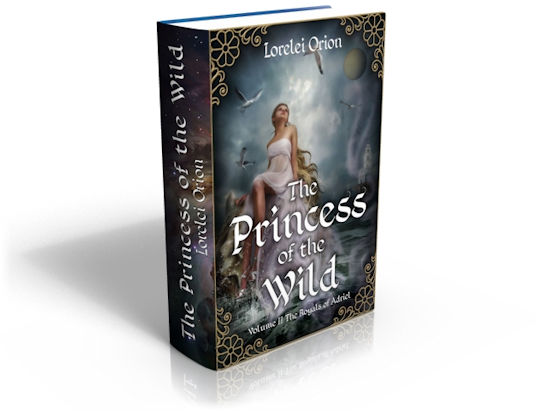 This scene is Skye and Nicholas’ first encounter, Prince Nicholas incognito and, unbeknownst to him, Skye innocent prey of a slave trade, and drugged…

Skye wasn’t sure what it was that woke her. She opened her heavy-lidded eyes and saw a glow illuminating the shadows, a light that hadn’t been there when she had fallen asleep. She turned to the source and was startled to see a man standing there, his form lit by the fire that flared brightly in the hearth.

She gasped and bolted upward. A man loomed above her, gazing down on her. He was tall and dark, his broad, tanned breast surprisingly bare. His hair—the color of ebony—touched his rugged shoulders, and his eyes were of the same dark hue, staring intently into hers. She had a flash of déjà vu, as if she was in the midst of a familiar presence… and then it was gone. Her pulse began to race. He was handsome, the features of his face being perfectly proportioned and majestic, so much so that it took her breath. He smiled a smile of one with a pleasant demeanor, but what she felt from it was a warning of impending danger.

“Nick Christian,” he replied, his voice rich and deep. “But, names aren’t important.”

Impatiently, he unbuckled his dark leggings, undoing the belt that encircled his narrow hips. He quickly discarded them, and then he was naked before her. Her eyes remained on his, his odd dark gaze holding her captive, seeing into her very soul. He sat beside her on the bed and he gently touched her cheek, brushing away a red-gold tress. She was frozen in her shock, unable to breathe.

“You, lovely woman, will be a treasure,” he said softly, his voice like a caress.

He placed a fingertip on her full lips, and then his manly lips came near to hers, and touched her…

A flood of emotion struck her as his warm, firm tongue searched hers, making waves and waves of an exquisite sensation flow through her. His large hand tightened at the back of her head, entangling in the softness of her hair. The strength of his tongue grew in force, and her own tongue began to travel his with a hesitant, and then equal, ardor. She could do nothing but feel this stunning pleasure, unable to grasp the reality of where she was or what was happening to her. Surely this was a dream from which she would wake? The drug that the Kalcoon had given her was making her hallucinate! She had been dreaming of a man, but he wasn’t truly here…

He ended the kiss with a husky groan. Bewildered, she discovered that she lay on the bed with him beside her, him half over her, his broad breast pressing boldly against hers, her robe her only protection.

The reality of the situation impacted upon her. She was awake and a man truly was here! Her dizziness from the drug surged within her again, but she was aware enough to know that this was real–

“No!” she breathed, pushing weakly against his massive shoulders.

He lifted his head, as if considering her resistance. “Madame, I have paid dearly for you,” he said, a bit sternly. “Don’t. I don’t play those games.”

He set his lips on her cheek and whispered, “Just let me have you.”

Her heart pounded wildly within her, her fear and confusion beginning to overwhelm her. His warm, hypnotizing lips were moving downward, slowly passing over her earlobe, her shoulder, down to the swell of her breasts, leaving behind a path of fire…